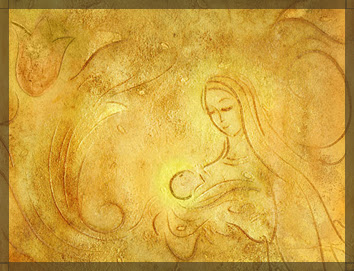 While they were there, the time came for the baby to be born,
and she gave birth to her firstborn, a son.
She wrapped him in cloths and placed him in a manger,
because there was no guest room available for them.
Luke 2, 6-7

Primogeniture is the right, by Jewish law or custom, of the legitimate, firstborn son (bekhor) to inherit his parents' entire or principal estate in preference to daughters, younger sons, stepsons, and illegitimate sons. Even the son of a deceased elder brother inherits before a surviving younger brother of his father by right of substitution of the deceased heir. The legal, social, and religious features of this institution were reflected in the norms and practices of ancient Hebrew society. Mosaic law granted the firstborn male a privileged status with respect to the rights of inheritance and cultic regulations.

A son might also refer to his own status as a firstborn son when addressing his father (Gen. 27:19, 32). The composition of Biblical genealogies illustrates that the status of the bekhor was a pervasive feature of Israelite social life. In many of them, there is a formula that specifies the status of the first-named son. Even in genealogies that do not specifically indicate the status of the first son listed, it was understood that he was the firstborn son. There are indications in the Bible that primogeniture carried certain duties and privileges in addition to the estate rights (Gen. 27; 48:13; Judg. 8:20; 1 Chron. 26:10).* 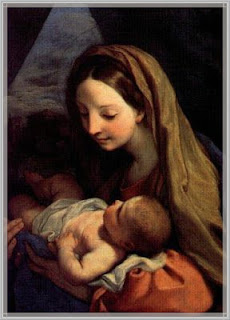 St. Luke has primogeniture in mind with respect to Jesus when he writes "she gave birth to her firstborn son." Yet many Protestants who aim to prove from sacred Scripture that Mary never remained a virgin after the birth of Jesus often cite this passage. They argue, in a numerical sense, that if Jesus were her first child, then naturally she must have had a second, third, or even fourth child together with her husband Joseph. But even though the firstborn son would logically have to be the first son that was born, the one who "opens the womb" as the "first issue", it doesn't necessarily mean that his parents subsequently had other children, sons or daughters. Recall that the firstborn son was entitled to a double portion of his father's entire estate without any fraction provided he had no younger brothers.

John the Baptist was the firstborn son (bekhor) of Zachariah and Elizabeth, but he was their only offspring. Elizabeth was aged and barren, but God intervened only so that she would conceive and bear Christ's forerunner. It wasn't for her becoming fertile, though her womb was made fertile by God on this occasion. The same can be said for Sarah who conceived Isaac, her only son. Isaac prefigures Jesus, as Sarah prefigures Mary. Both Sarah and Mary had only one child, a firstborn son who was rightfully entitled to the inheritance of his father's estate as principal heir without any competition (Gen. 21:9-10; Lk. 1:31-33). Jesus is the offspring or seed of the free promised Woman who did not conceive and bear children (Ishmaels) in slavery to sin (Gen 3:15). Mary and Joseph could not have had their own children together without disfiguring God's perfect plan, seeing the Lord’s handmaid is Sarah's anti-type. 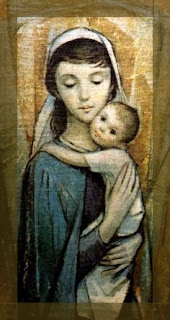 Hence, Luke refers to Jesus as Mary's firstborn son (bekhor) in the sense that our Lord is the principal heir and successor of his heavenly Father's family. As YHWH is head of His chosen people, the Israelites, in the Old Dispensation so, in the New Dispensation, Christ is the Head of his Church and the first fruit of the children of the resurrection in his heavenly kingdom (1 Cor. 15:20-28). As his brothers and sisters by our baptism, we have been granted a share in his inheritance (Rom. 8:17). The only other children Mary has begotten are we who bear testimony to Christ and keep God's commandments (Rom. 8:29; Rev. 12:17). We are the offspring of the Woman of promise along with Jesus (Gen. 3:15; Rev. 12:1-5), though spiritually. In labor, Mary bore us as she sorrowfully stood beneath the Cross with no other uterine offspring of hers alongside, but with the Disciple who represents all faithful Christians (Jn. 19:26-27).

In any event, by the prescriptions of the Mosaic law, a father was obligated to acknowledge his firstborn son as principal heir. Christ's heavenly Father did this when a voice came out of the heavens at the time of our Lord's baptism: "This is my beloved son, in whom I am well pleased." (Mt. 3:17; cf. Lk. 2:49). God did so again at the time of Jesus' transfiguration on Mount Tabor (Mt. 17:5). In turn, Jesus acknowledged his own status as the firstborn Son of his Father after Caiaphas asked him, "Are you the Messiah, the son of the Blessed One?" Our Lord responded, for which reason he was sentenced to death and finally received his eternal inheritance, "I am. And you shall see the Son of man sitting on the right hand of the power of God and coming with the clouds of heaven" (Mk. 14:61-62; cf. Dan. 7:13.

“It helps us to understand the terms ‘first-born’ and ‘only-begotten’ when the Evangelist tells that
Mary remained a virgin ‘until she brought forth her first-born son’ [Matt. 1:25]; for neither did
Mary, who is to be honored and praised above all others, marry anyone else, nor did she ever
become the Mother of anyone else, but even after childbirth she remained always and forever an
immaculate virgin.”
Didymus the Blind, The Trinity 3:4
(A.D. 386) 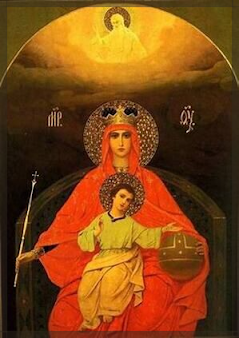